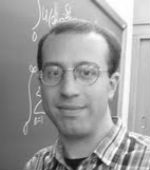 Seth Baum obtained his Ph.D. in geography from Pennsylvania State University. He also holds an M.S. in electrical engineering from Northeastern University and B.S. degrees in optics and applied mathematics from the University of Rochester. His doctoral work developed the concept of space-time discounting within the context of climate change decisions. He is also co-founder and Executive Director of a new think tank called the Global Catastrophic Risk Institute.

Seth’s CRED research as a postdoctoral research scientist covered two main topics. With Bill Easterling of Penn State, he extended his research on space-time discounting. He also studied the relationships between awareness, values, communications, and behavior change for reducing greenhouse gas emissions and other pro-environmental decisions. Finally, Seth is active in collaborations between academics and artists for environmental communications, including through the group Positive Feedback and through the video company Osomocene Productions.