Reducing energy consumption has many benefits, ranging from economic and social advantages to environmental welfare. But despite the benefits that energy reduction provides, the adoption of energy efficient technology has been slow, and there are a number of reasons why this might be the case, including temporal discounting (the tendency to favor small rewards now rather than larger rewards in the future) and general uncertainty surrounding the benefits of this technology. One solution to this problem has been to attach environmental messages or labels to energy efficient products – however, it is unclear whether these labels achieve the desired results. To this end, CRED researchers stepped in to examine the effects of environmental labeling on consumer choice while taking into account political affiliation.

Two separate studies were employed to determine the relationship between consumer choice and ideology. The first study examined how political and environmental attitudes influence decisions that involve investment in energy efficient technology. The first study surveyed a national sample of 657 respondents, for whom political ideology and environmental concern was measured, and asked them to evaluate three reasons for adopting energy efficient technology: cost savings, reduction of carbon emissions, and reduction in dependence on foreign oil. Survey results showed that conservatives are, in fact, less interested in supporting energy efficiency investments due to the lesser importance they placed on reducing carbon emissions than their more liberal counterparts. However, both conservatives and liberals similarly valued other aspects of energy efficiency, in particular cost savings and reducing dependence on foreign oil. 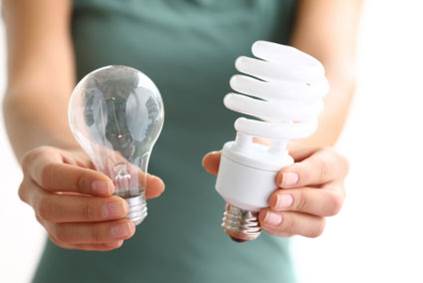 The second study delved into the consequences of this difference by examining political and environmental attitudes and how they influenced consumer interest in buying energy efficient technology when a “green” label is attached to a product. To accomplish this, 210 participants were provided with $2.00 and prompted to choose between an incandescent and compact fluorescent (CFL) light bulb. All participants were first presented with the economic advantages of the latter. The experiment varied two features: the price of the CFL (same as the incandescent or $1.00 more expensive) and the presence of an environmental label. All participants (but one) bought the CFL when both bulbs were priced the same. When the CFL was more expensive (without a “green” label), liberals and conservatives bought it at the same rate (about 60%). However, when a “Protect the Environment” label was attached to the CFL, moderates and conservatives were significantly less likely to purchase the CFL, with the rate dropping to about 30%. 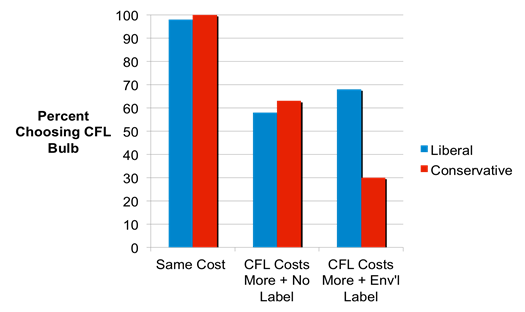 Based on these findings, it would appear that the best way to promote energy efficient technology in order to appeal to the widest possible audience is not by emphasizing its environmental benefits, because these issues are so politically polarized. Researcher Dena Gromet notes that “using environmental messages can in fact dissuade some people from investing in energy efficient goods even when they are aware of the long-term economic benefit,” also stating that “these findings highlight the importance of considering how non-economic sources of value affect people’s purchasing decisions, as these decisions are not only based on the trade-off between short and long-term costs.” Instead, a more effective strategy may be to focus on other aspects of energy efficiency (like saving money or reducing reliance on foreign oil) that resonate across the political spectrum.

CRED2 Award (2010-2015): Funding was provided under the cooperative agreement NSF SES-0951516 awarded to the Center for Research on Environmental Decisions.