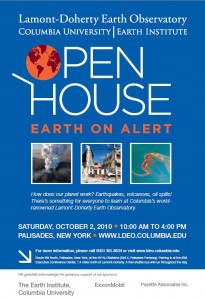 CRED researchers participated in the 2010 Lamont Doherty Earth Observatory Open House event. This event offered visitors a day of free lectures, demonstrations, and workshops for adults and children. The theme, Earth on Alert, highlighted scientific research on hazards affecting our planet and on ways to prepare for the future. Over 3,000 people participated in this event at the Lamont campus in Palisades, New York. 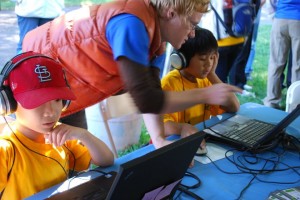 CRED volunteers were able to share ideas of improving climate change communication with colleagues and visitors alike. The CRED table featured an interactive game involving environmental decision making, showing participants how some psychological laboratory studies are performed. On the computers, participants simulated the daily task of dishwashing. They had to choose between a more tedious, but environmentally-friendly options or an easy and quick but environmentally-costly option. If finished quickly there would be more time to watch a fun video clip, but going faster would cost more “green points”. This simulation aimed to examine how people are motivated to make pro-environmental decisions. There was great interest in the game, our research, and the CRED Communication Guide as well. 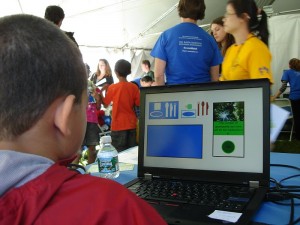 A visitor to the Lamont Doherty Open House plays with an interactive environmental decision game at the CRED table.

Visitors also enjoyed flash performances by our partners, Positive Feedback, featuring the talented actors from Superhero Clubhouse. Near the food tent, undercover actors performed a sequence of events that looped ten times. Repeatedly a “couple” argued over recycling, had a can of Coke explode, cleaned the spill, built a house of cups, and sang We Are The World – referencing environmental action, volcanoes, the oil spill and personal responsibility, earthquakes and infrastructure, and disaster relief. Visitors could also share their experiences with these issues in stories or pictures, which would then be incorporated into future performances.

Overall the Open House was an educational, entertaining, and energizing experience for all involved. The event provided a great outreach opportunity and was tremendously successful!